The Cat’s Table by Michael Ondaatje

I listened to this lovely novel, read by the author. There’s usually a good reason why actors with trained voices read fiction, but Ondaatje, with his low, lightly accented voice, who often slurs or even mispronounces words, is a remarkable narrator for this very personal coming of age story. I can’t imagine that I could have enjoyed it more–or even as much–on the printed page.

The narrator and main character is named Michael and he shares some biographical details with Ondaatje, so it’s hard in a story that’s appears so personal, so psychologically true, not to believe that we’re reading something close to memoir. But we’re not; we’re reading literature written by a master hand.

The novel takes place for the most part on a ship, called the Oronsay. Eleven-year old Michael is traveling from Ceylon (Sri Lanka) to England to join the mother he hasn’t seen in 5 years. On the ship he is seated at the cat’s table–the opposite of the captain’s table–and there he meets 2 other unaccompanied boys his age: Cassius and Ramadhin.  For 3 weeks, trying to fill up the long days, they study their fellow passengers and cause trouble on the ship, but in the process they learn who they are. They come of age and Michael, in particular, reaches that moment between childhood and emerging adulthood when, for the first time, he has a sense of who he is.

Ondaatje’s evocation of that voyage, geographical and psychological, is lyrical yet precise. What at first seems like a catalog of the boys’ mischief turns into a story of intrigue, crime, passion, betrayal, and sadness so haunting that it leaves the reader longing for more. Ondaatje gives us a glimpse into the future for most of the characters but leaves us with an ambiguous ending–and nostalgia for a journey we’ve only read about.

State of Wonder by Ann Patchett

I guess I’ve been reading too much domestic fiction lately, because State of Wonder was a delightful change of pace, a novel where there’s no possibility of domesticity. It’s set in the Amazon jungle, where Annick Swenson, a brilliant, ferociously driven doctor, has been studying a very interesting phenomenon among the women of a remote tribe, a phenomenon that could translate into a wildly lucrative drug for the pharmaceutical company that’s been funding her research.  Dr. Swenson is a researcher who refuses to be beholden to the crass commercial interests that provide her funding. She’s thrown away her cell phone and her infrequent letters reveal how shockingly self-absorbed and high-handed she has become.

A researcher is sent to Brazil to find her but something has gone terribly wrong and he is not going to return home. His colleague, Dr. Marina Singh, must go and sort it all out.  And here’s where we enter, dear readers. We accompany Dr. Singh, we see it all through her eyes: the stink and sweat of the jungle, the mesmerizing flora, the impenetrable native customs. It’s overwhelming and bewildering to Marina, but she soldiers on, hoping to unravel it all and we try to stay with her or one step ahead. It’s a great story of clashing personalities with the mystery of the jungle to lend atmosphere.

Patchett’s theme is familiar, but that’s not to belittle it, just to say that she’s in very good company. Novels, plays, memoirs, and films about the (often naive) outsider trying to navigate a strange culture are legion. Along these lines, other novels that I’ve loved: Amitav Ghosh’s The Hungry Tide and Ronan Bennett’s The Catastrophist. For me, Henry James’s novel The Portrait of a Lady, qualifies, even though the setting is not exotic and the culture not ostensibly strange. I’d also add The Tempest, for plays; and Apocalypse Now as one example of a huge genre of films.

Many travel memoirs exploit this theme and we love them. In The Lost City of Z: A Tale of Deadly Obsession in the Amazon,  David Grann tells how he went off to the South American jungle in search of a famous vanished explorer. In Down the Nile : Alone in a Fisherman’s Skiff, Rosemary Mahoney navigates a hostile environment to accomplish her goal. I loved Erika Warmbrunn’s Where the Pavement Ends: One Woman’s Bicycle Trip Through Mongolia, China & Vietnam, where she takes on multiple cultures in her heroic journey. And for great fun, you can’t do better than God’s Middle Finger: Into the Lawless Heart of the Sierra Madre by Richard Grant. A novel that continues to resonate for me as our country continues to get mired in unwinnable, shape-shifting wars, is The Lotus Eaters by Tatiana Soli.

I think many of us are armchair travelers and armchair anthropologists. I still have my old copies of Frazier’s Golden Bough and C.W. Ceram’s Gods, Graves, and Scholars. It’s the endless fascination of the new and unexplored.

The Year We Left Home 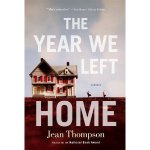 I was having lunch with my cousin Jane last week and we were talking about the kinds of books we like to read and we both agreed that we don’t need closure in a novel, that in fact, we prefer ambiguous endings. Life goes on and there’s rarely closure and it’s satisfying to find those qualities in a novel. I think that’s why for me, reading mysteries is like eating candy (not a good habit). When you’re done reading (or chewing), the thrill is gone and you need another one to stoke your addiction.

My most recent favorite novel with an ambiguous ending is The Year We Left Home by Jean Thompson, coming out in May. Thompson follows a Midwestern family for 30 years, particularly the children who come of age in the early 1970s. Thompson’s descriptions of people and situations are fabulous: a disliked brother-in-law is “an undigested lump” in the family. The chapters are like punchy short stories, filled with character, incident, and the economic and social changes that reverberated in the lives of farming families in the Midwest.

Nothing in these characters’ lives can be predicted, but everything feels just right. At the end, there’s sadness, redemption, and some new beginnings, leaving us with lives we recognize as our own.