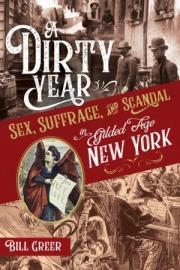 The years between the end of the Civil War and the beginning of the next century were filled with outsize personalities and scandals–great stories for readers of social history. In A Dirty Year, Bill Greer focuses on the turbulent year 1872, when New Yorkers were riveted by “stories of love and murder, warring women and feminine financiers, smut dealers and moral crusaders, mommy mutilators and baby killers.”

The book opens with Jim Fisk, who, with his partner Jay Gould, had bilked investors of millions and taken the Erie Railroad out from under Commodore Vanderbilt’s nose. But the scandal in the tabloids in 1872 concerned the very public love triangle of Fisk, the prostitute Josie Mansfield, and Ned Stokes. Fisk was a notorious player in New York’s business and social life. New Yorkers flocked to the opulent musicals he staged at the Grand Opera House on Eighth Avenue that included something called the “Demon Can-Can.”

A Dirty Year follows the story of Fisk, Stokes, and Mansfield, during the course of that year, but that story is joined by two others that filled the newspapers and titillated readers. Anthony Comstock, for one, roamed New York, seizing literature he deemed “smut,” and bringing printers to trial. His crusade extended to abortionists and the deaths that resulted from their techniques. The trials made front-page news.

The third story, and maybe the one most filled with outsize characters, is the tale of Victoria Woodhull and her sister Tennessee “Tennie” Claflin, two women who broke all the boundaries of ladylike behavior. The two sisters started a successful brokerage firm on Wall Street, published a newspaper which became a mouthpiece for their progressive views, and revealed the adulterous relationship of the Reverend Henry Ward Beecher, beloved preacher of Brooklyn Heights. The glamorous sisters, especially Woodhull, were fiery, persuasive speakers who knew how to get what they wanted from men. Advocates of free love, Woodhull claimed the “natural right to love whom I may, to love as long or as short a period as I can; to change that love every day if I please, and with that right neither you nor any law you can frame have any right to interfere.” She joined the suffragist movement and for a while was hailed as a champion, but her extreme views did not accord well with the more gradualist views of Susan B. Anthony and others. She ran for president of the U.S. at a time when women couldn’t even vote and surprised Frederick B. Douglas with the news that he’d be her vice president. The sisters always made good copy.

As Greer writes, “the paths of Fisk and Woodhull and Claflin and Beecher and Comstock… would cross and recross in a tangle not even God could unravel.”  For lovers of social history, this is a good book to read to remind us, in our own time of outsize personalities and scandalous behavior, that we’ve been here before.