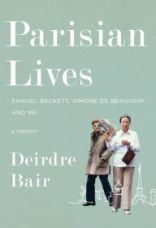 I was privileged to know Deirdre Bair, who I met several years ago through my friend Jane Kinney-Denning. I can’t consider myself more than an acquaintance, but it was a delight to know her. She died last week, not from the virus. She was in her eighties, but was working on another project, a book about T.S. Eliot. Deirdre didn’t shy away from complex, difficult topics! She was always kind, elegant, and made you feel like your words were important to her.

She started out as a journalist, then went back to graduate school for a degree in Comparative Literature. Her thesis was on the novelist and dramatist Samuel Beckett. She had a different approach to his work, one that incorporated his life as an Irish writer into an understanding of his writing. This was during the time when that approach was anathema in academia. The text was all!

She decided to write to Beckett to see if he would cooperate with her on a biography. To her delight, he was willing. In an enigmatic and revealing comment, he said that he would “neither help nor hinder her.” She began several years of traveling back and forth to Paris to talk to him, his friends, and do research. She had a variety of experiences with various factions of friends, each of whom had his or her own agenda (often self-serving),  to protect Beckett from this young biographer. Bair was caught up in the turmoil of personalities, trying to unearth the truth, determined to verify stories from multiple sources. Beckett, true to his word, didn’t help or hinder her. Many people thought this young woman was not up to the job of writing Beckett’s biography. It was not easy for her to persevere.

Bair won the National Book Award in 1981 when the paperback edition of Samuel Beckett: A Biography was published, a great vindication of her talents and perseverance. She went on to write an acclaimed biography of Simone de Beauvoir, also while the author was still alive. Bair’s subsequent biographies, of Carl Jung, Anais Nin, Saul Steinberg, and Al Capone were all written after the subjects’ deaths.

It’s important to understand that these biographies were written by a woman who struggled to hone her craft in a time when women were disdained for the kind of work she did. How could a woman do important literary work? Biography was looked down upon by academic faculty members. She taught in a university but was refused tenure. She still had to fulfill the responsibilities of a mother and homemaker. She writes about the hours of cooking and filling the freezer before she went to France, the guilt of being so involved in her work.

I know all this because her last book was about the years she spent writing the biographies of Beckett and de Beauvoir. It’s called Parisian Lives: Samuel Beckett, Simone de Beauvoir, and Me. In it, she was able to tell some of the stories that she couldn’t put in the book. I spoke to Bair when she started working on the book: she was having a hard time writing about herself, after years of never putting her own life in her writing. What could she call the genre of the book? I sent her a quote from Ursula LeGuin: “Genre, a word only a Frenchman could love.” She liked that.

It’s very sad to realize that she’s gone. My nonfiction book group is reading Parisian Lives this month and I was hoping that Deirdre would Zoom with us at our next meeting so they all could meet her. But it’s not just sad for me; she’s a great loss to the literary community, where she was not only a great writer, but also a support for writers in general. You can read more about her here. You can also hear her speak about Parisian Lives here, at a talk she gave in November at the Philadelphia Public Library. Enjoy.