The Mirror and the Light by Hillary Mantel

I’m listening to The Mirror and the Light now, the third novel in the Thomas Cromwell trilogy by the brilliant writer Hillary Mantel. Every scene shines, every scene is a remarkable set piece. The reader, Ben Miles, distinguishes all the voices, and makes it all very dramatic. The book opens with the execution of Anne Boleyn, just where we left off with Bring Up the Bodies 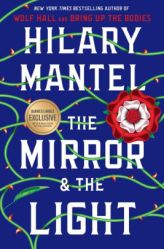 . The reader sees it from the point of view of Cromwell who is thinking about the events that led up to this day: the political intrigue and the trial. Mantel provides a few details about the gruesome event as Cromwell takes it in. In successive chapters she circles back to Anne repeatedly, so the reader has an ever-increasing awareness of the execution’s brutality and its emotional impact. It’s exactly the way it would happen: you take in what you can at the time, then it comes back to haunt you and you see more.

There’s a scene shortly after that where Cromwell visits George Boleyn in the Tower where he’s awaiting execution. Boleyn breaks down over the course of the scene and at the end, this formerly cocky peer is in tears, shaking, clutching Cromwell. It’s shocking but how could it be otherwise? We feel Boleyn’s pain and hear Cromwell’s thoughts at the same time; it’s a very powerful scene.

There’s so much detail in every scene; never just one thing going on. Sometimes Mantel adds domestic stuff–a cat stuck in a tree colors Cromwell’s attention to an important conversation; the minor characters, even young servants in his household are fully fleshed out, and she provides background to remind readers of things they may have forgotten. The scenes are very visual and full of tension. I can’t imagine how she wrote it. Did she add the layers separately? Scene by scene it’s a study in power and its abuses. At one point, the French ambassador, Chapuys, reminds Cromwell that he’s a man alone, not part of a large and powerful family like the Seymours or the Howards. There’s no one to protect him. It’s very poignant; although Cromwell may be second to the King, he is very vulnerable. He has surrounded himself with friends he trusts, but there’s no one who knows all his thoughts. “Since when was I an open book?” he says to his closest friends.

Since The Mirror and the Light is quite long, I won’t be able to finish it before the loan expires, so I’ll have to add my name to the bottom of the list and wait my turn. Frustrating, but I’ll gladly wait.

One response to “The Mirror and the Light by Hillary Mantel”