Artists and Their Legacies 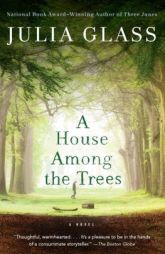 I just finished reading A House Among the Trees (Knopf/Doubleday, 2017) by Julia Glass. Don’t know how I missed it when it came out, since I’ve eagerly read almost every novel she’s written. This one didn’t disappoint either! All her characters step off the page; it’s just as if she’s writing about people she knows and of course the reader begins to feel the same way. By the end of the book, it’s hard to say goodbye.

In this novel, we’re introduced to the writer Mort Lear, a children’s author whose early picture book Colorquake is loved by children and adults alike. When the book opens, Mort has recently died and there is a general outpouring of grief at the loss of so beloved an author. However, as happens in novels, Mort’s death–and the will he leaves–stirs up trouble. His longtime live-in assistant Thomasina (Tommy) learns to her chagrin that Mort left her everything, including the house. She’s the one who’ll dispose of his art. Tommy has devoted her life to Mort, happily for the most part, but looks forward to independence and leaving the isolated house among the trees in upstate New York. It’s time after so many years to learn to be Tommy without Mort and to repair her relationship with her brother Dani, her only remaining family.

To complicate matters, when Mort died, there was a biopic in the works, starring Nick Green, a rising star, the latest British heartthrob. Nick arrives on Tommy’s doorstep to soak up information about Mort so he can, in method actor fashion, “become” Mort for the movie. There’s also a museum curator who was expecting that her new museum of children’s literature would be the recipient of Mort’s works, the centerpiece of the collection, but Mort’s will has left everything to Tommy. The curator feels betrayed by Mort.

The reader knows there’s a dark secret in Mort’s life dating back to his childhood. It informs his writing, especially the beloved Colorquake. Many people believe they know what that secret is; it hovers over the book, dark and dangerous. Other secrets and betrayals complicate the relationships among the characters. Glass shifts back and forth from the present to earlier parts of their lives so the characters become richer and more familiar to us until we are living with them and sharing their thoughts. She withholds and releases crucial information with just the right timing. A House Among the Trees is a lovely novel that showcases Glass’s capacity for empathy and gripping storytelling.