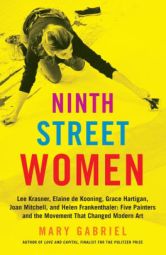 The subtitle of this wonderful book is: Lee Krasner, Elaine de Kooning, Grace Hartigan, Joan Mitchell, and Helen Frankenthaler: Five Painters and the Movement That Changed Modern Art. Mary Gabriel’s brick-like book is an excursion through the artistic world of the 1930s, 40s, and 50s as Abstract Expressionism took the art world by storm. These five women were in the thick of it, inspired and inspiring. They were driven to be artists despite the demeaning critics (women couldn’t make good art they were told); despite the early ridiculing of Abstract Expressionism; and despite those who wanted them to just nurture the male artists who were doing the “real” work.

Gabriel tells the stories of each of the five. Beyond that, she brings the reader into the bohemian milieu that developed around the artists, male and female, especially the Ninth Street East Village neighborhood where they lived, painted, drank, fought, loved, and partied. What raucous lives they lived! They often made bad decisions but produced great paintings. Gabriel writes about the women’s relationships with Jackson Pollock, Willem de Kooning, Larry Rivers, Mike Goldberg, Franz Kline, Arshile Gorky and many others. Money was mostly scarce since there were no buyers for the works for many years.

There’s so much content in this book that it’s hard to know how to explain its effect on the reader in a few paragraphs. Gabriel incorporates the social history which influenced the artists, like the turbulence of the 1930s and early 1940s that brought abstraction into being. In tandem with the personal stories, the result is total immersion in a heady, gossipy, intellectual world. The five women of the title were more than painters; they were part of the intellectual underpinnings of the movement in fundamental ways. It’s an absorbing, exhausting, thrilling experience to read about their lives.